Travel through time: the Alcazar of Seville. 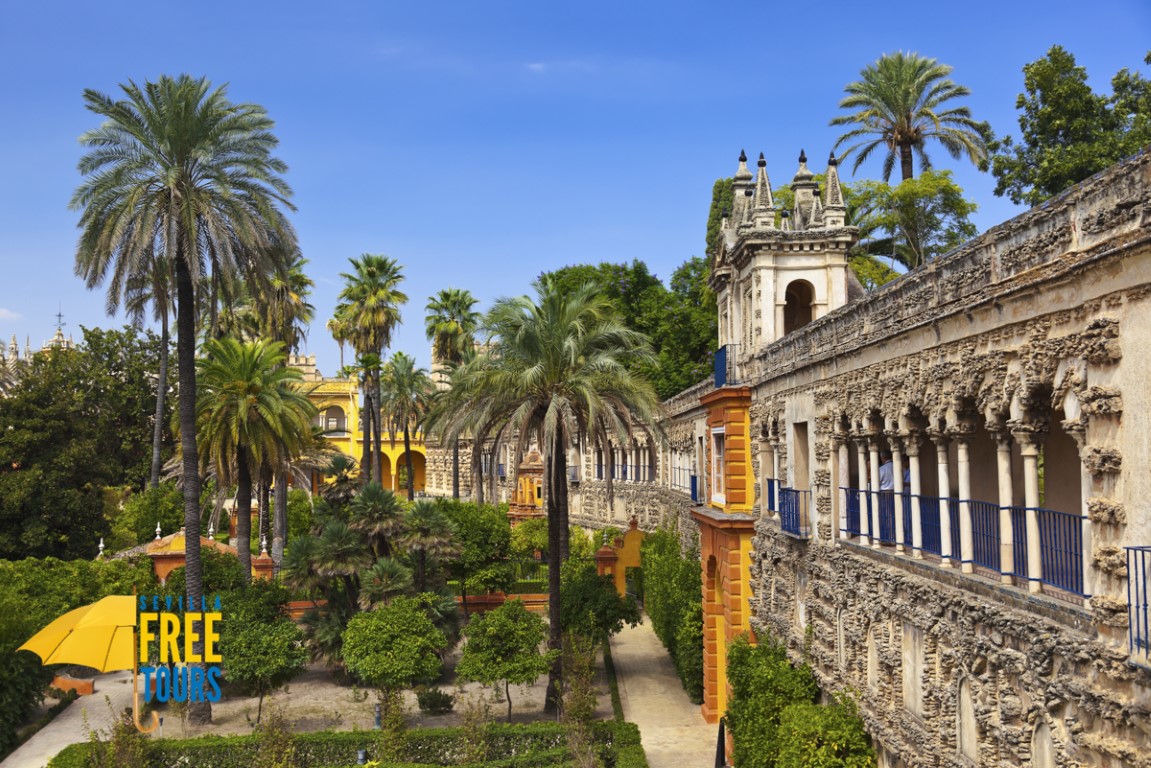 Seville is one of those cities where past and future walk together. In Seville we can pray in 13th century religious spaces, have an aperitif in the biggest skyscraper in Andalusia built in the 21st century and when we cross the Puerta del León, also called de la Montería, we start the best tour for the time we can do in Seville. Welcome to the Real Alcázar, a World Heritage Site declared by UNESCO since 1987.
Considered the oldest royal palace in Europe, its foundations rest on an ancient Roman settlement that during the Visigothic period hosted the early Christian basilica of San Vicente Mártir where the remains of San Isidoro de Sevilla rested. Although from the same century VIII when the Muslims begin to build in this location for the use of the rulers, it is the caliph Abderramán III who decides to build what we know today as the Real Alcázar of Seville at the beginning of the 10th century. During the Abbasid eras, Almorávide and Almohade palaces will be added, reforms will be carried out and the spectacular gardens will be shaped by which we can get lost today.
After the Christian reconquest carried out in Seville by Fernando III the Saint in 1248, the new kings are not going to remain indifferent to the magnanimous fortified palace of Muslim origin and will want to use it as a residence during their stays in the Andalusian capital.
But of course, the Christian kings wanted to leave their mark on this Seville home, so Alfonso X the Wise raised the Gothic palace in the thirteenth century, and Pedro I El Cruel (or El Justiciero) will be responsible for building what Today is an undisputed jewel: the Mudéjar Palace of the 14th century.
Subsequent reforms and additions are going to shape the aesthetics of the Alcázar. In the sixteenth century changes will be made to give a Renaissance touch to some spaces, highlighting the Arbor of Charles V in the gardens, inside which you can see the scheme of the Garden of the Labyrinth (today much simpler). In the 18th century, classicist aesthetics was going to undo the taste for the baroque, and in the 19th century we can appreciate the touch of the Bourbon monarchs both in pictorial decoration and in the reform of some rooms. And of course the gardens do not cease to be modified from the 16th century until the 19th century.
So after this brief walk through the evolution of the Alcázar we see that we are facing a living building of which to make an exhaustive description would be an almost endless work, but we want to talk about some details. Of course at the end of this text you will have information about schedules and prices of access to the Reales Alcázares de Sevilla because if you were wondering what to do in Seville, this is the most spectacular monument that our city welcomes.
El Patio del Yeso is one of the brief original spaces of the Muslim era, due to the destruction of Islamic palaces to make room for Christian spaces.
The Casa de la Contratación de Indias was based in Los Alcázares under the command of the Catholic Monarchs and until the end of the 16th century, with the Admiral's Room being the only vestige that remains.
Behind the Gallery del Grutesco, we can hear the two baroque melodies that reproduces every hour one of the three hydraulic organs that are preserved in Europe dating from the seventeenth century.
The Baths of María de Padilla are one of the most spectacular areas of the Alcazar of Seville, but they were never baths nor were they built for the lover of Pedro I. It is a cistern of the Almohade period, reformed in the 13th century by Alfonso X el Sabio . Nevertheless, the popular legend tells that Pedro I ordered to build this beautiful area so that María de Padilla had its own leisure space.
There is much more History, stories, legends and hidden spaces in the Alcázar impossible to synthesize in an entrance, but we encourage you to discover it in situ. Then we leave the schedules and we also remind you that during our guided tours of Sevilla Free Tours, specifically on the route called Free Tour Casco Histórico, we talk about all the main buildings of the city and we can advise you the best ways to visit them.
Schedules and prices for access to the Alcazar:
From October to March, from Monday to Sunday from 9.30 to 17.00.
From April to September from Monday to Sunday from 9.30 to 19.00.
Regardless of the time of year, the last hour of Monday is free access, the rest of the time the price of the entrance is € 11.50. If you are a pensioner or a student between the ages of 17 and 25 presenting documentation that proves it, the cost is reduced to € 3. There is the option to book the online ticket from the official website of the Alcazar with a management fee of 1 euro and the added advantage of not waiting for the long queues.
If you are looking for a quality Free Tours company in Seville to discover everything you can do, do not hesitate to look for yellow umbrella guides, experts in heritage and natives who will show you both the buildings and main neighborhoods and the secrets that their stones hide Book your route for free from https://freetoursevilla.es/
Visit Seville
Quality Tourism
Sevilla Free Tours
What to do in Seville
Reales Alcázares opening hours