Palacio de Dueñas: cultural center in the heart of Seville. 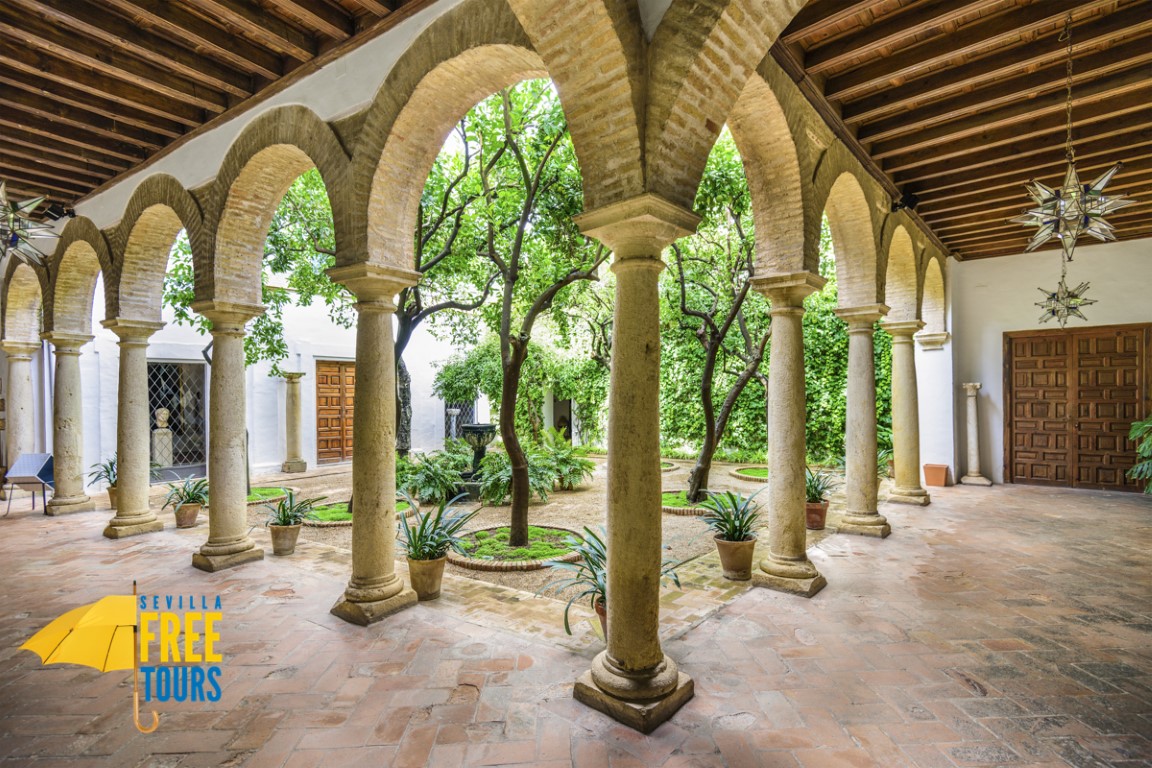 The Palace of Las Dueñas is one of the most famous palaces in Spain and one of the most visited in Seville. And its importance comes not only because of the fame that a certain Duchess has given it but also because of the History and cultural focus that exists in each of the corners of this Palace in the heart of the city of Seville, located in the same street Dueñas .
Its origin dates from the 15th century when it was built with Mudejar and Plateresque Renaissance styles by the Pineda family. Its name is due to the Monastery of Santa María de las Dueñas (destroyed in the famous 1868, during which much of the Sevillian cultural heritage was destroyed), which was in that area and which had great importance because the nuns took care of the queens and ladies of the court of the Crown of Castile in the reigns of the Holy King Fernando III and his son Alfonso X el Sabio. But in 1484 the Pineda family had to sell the property in order to pay the ransom of Don Juan de Pineda, a prisoner during the Granada War, which ended the Christian Reconquest. The Pinedas sold to the Ribera family and it is through her and the marriage between Antonia Enríquez de Ribera and Fernando Álvarez de Toledo and Mendoza, Duke of Alba, that she reaches the family of the Alba. From 1612 to the present it is owned by this family.
The palace has even gone on to become a neighbor's house in the 19th century and during this period the great Sevillian and Spanish poet Antonio Machado was born when the manager of the estate rented one of the rooms to the Machado family. The same Antonio in some of his works evokes his childhood in this Sevillian palace. It has also become the residence of great illustrious figures of Spanish and British royalty. Even celebrities such as actress Grace Kelly and her husband Rainier of Monaco or the same wife of John Fitzgerald Kennedy, Jacqueline Kennedy.
In addition, throughout history, the Palace of the Dueñas has given shelter to numerous works of art and is one of the great centers of artistic and cultural heritage that exists in Seville. Paintings by Sorolla himself, Gonzalo Bilbao or Romero de Torres, Roman sculptures, 17th and 18th century Flemish tapestries and mosaics. Of course not forgetting the large luxurious gardens that house this palatial house so sevillian but at the same time universal for its centuries of history and culture that surrounds it.
For all this, from Sevilla Free Tours we recommend your visit. The schedules of the Palacio de Dueñas are:
Summer (April to September) from 10 a.m. to 8 p.m. Access to the Palace and the box office closes at 7:15 p.m., it is vacated at 7:50 p.m.
Winter (October to March) from 10 a.m. to 6 p.m. Access to the Palace and the box office closes at 5:15 p.m., it is vacated at 5:50 p.m.
Closed on January 1 and 6 and December 25. The previous days will be open until 3:00 p.m.
The Management of Las Dueñas may modify the opening hours in those situations in which it deems necessary.
Telephone number: +34 954 21 48 28 (working, not holidays, during opening hours)
And the prices of the Palacio de Dueñas tickets are:
General admission: € 10
Entry of groups: € 9 (minimum 20 people)
Reduced ticket: € 8 Children from 6 to 12 years old, unemployed, students under 25, disabled and over 65 years old. Necessary supporting documentation
Free admission: Under 6 years old. Official guides from Monday to Friday, not holidays. Monday without holidays from 16h until full capacity (only acquisition of free ticket at the box office from 16 hours on the same day, not possible the previous reservation).
Visit Seville and enjoy its corners like this one. If you want to know more about the city and its details do not hesitate to contact us and make our free tours. Every morning at 10:00 in Plaza Nueva, our free tour through the Historic Center of Seville.