Archivo de Indias: Center of the period that changed the History of the world. 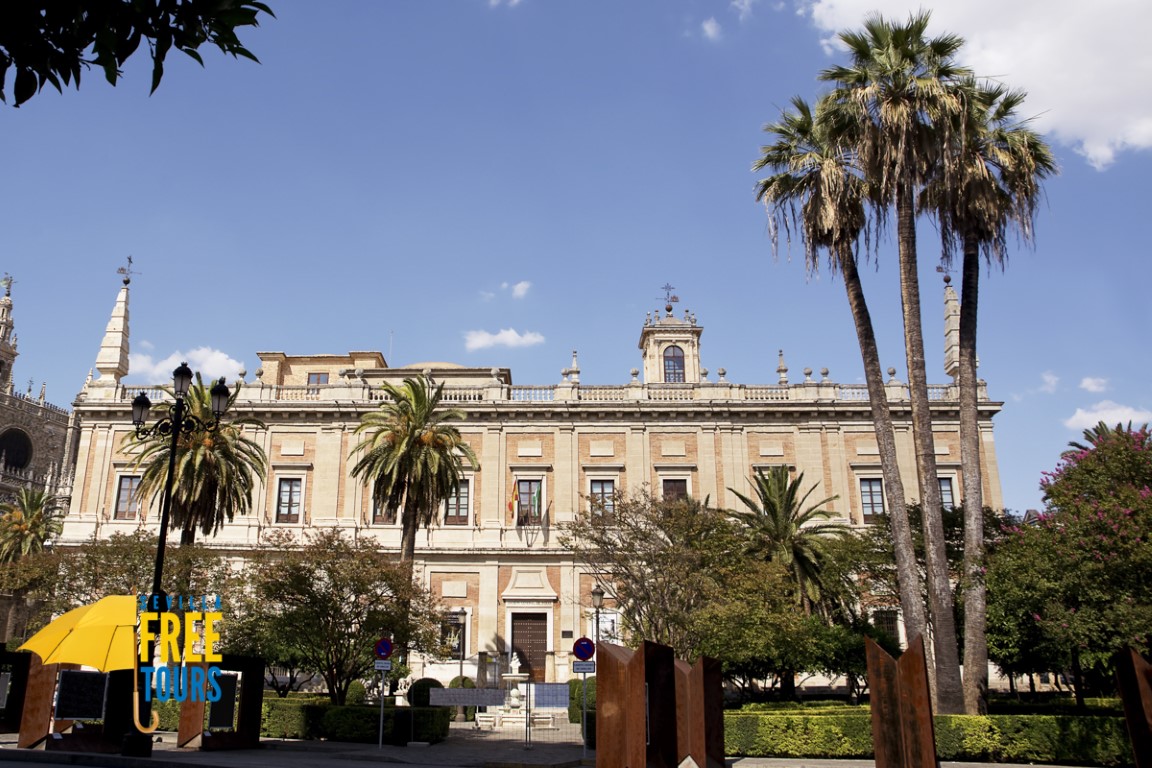 The General Archive of the Indies is, of the main monuments of the city, of the least known. This place was declared a World Heritage Site in 1987 by UNESCO next to the Cathedral of Seville and the Royal Alcázar of Seville, the three monuments being in a privileged place of the city, the Plaza del Triunfo. And the Archivo de Indias was not declared a World Heritage Site just for the building itself but above all for the 9 km of documents and files inside. But, let's start with the origins of the building.
The current Archive is located in a building that was Casa Lonja de Sevilla, that is, the central market of the city. It was built at the end of the 16th century and its architect Juan de Herrera, the same as the famous San Lorenzo del Escorial. The main reason why Felipe II ordered to build this Merchants' Market House was for the merchants who carried out their business in the stands of the Cathedral and that when there was inclement weather they took refuge under a sacred roof, with all that that entailed. That caused bad smells and many noises during the sacred cults, so the Cathedral Chapter complained and decided to create the central market of the city and surround both the Cathedral and the Lonja of columns and chains to separate the sacred area of ​​the mercantile. It will also be used in the seventeenth century by the famous Sevillian baroque painter Bartolomé Esteban Murillo as his painting studio.
And what did so many merchants do for the city of Seville? Because, since the beginning of the 16th century, Seville had become the Port and Gate of the American Indies and the economic and financial capital of the whole world. That made Seville host thousands of merchants from all over the world, making it a cosmopolitan city and the third largest city in Europe at the time. But at the beginning of the eighteenth century, Seville lost the monopoly of trade with America with the arrival of the Bourbons to the Spanish crown and the Casa Lonja was abandoned and Seville went on to lose a lot of population and suffer a great economic crisis, which was already suffering from half of the seventeenth century due to a large epidemic of plague that killed half the population.
After the abandonment of the building during almost all the century, in 1785 the first legajos begin to arrive. The main reasons why Carlos III decided to convert this building into a Archive and centralize all the files related to America were: the lack of space in the Archive of Simancas and the fight against the Spanish-speaking propaganda coming from France and Great Britain, enemies in that era of the Spanish Empire, and thus write the History about the conquest and Hispanization of America.
The documents that are in the Archive of the Indies are related to the main Spanish American estates such as the Council of the Indies, the House of Hiring, the consulates of Seville and Cádiz or the Secretaries of State and of the Universal Office of the Indies, of State, Gracia and Justice, Finance and War. All of them house archives from the 16th to the 19th century, where there are autograph documents by Christopher Columbus, Hernán Cortés or Magallanes. For what is the largest archive of Spain in relation to America and every researcher or historian goes to the basement of the building to investigate this important period that changed history.
And you can also visit the building and enjoy the various exhibitions related to this subject in the Archivo de Indias, whose schedule is as follows:
Tuesday to Saturday, from 9:30 a.m. to 4:45 p.m.
Sunday and holidays, from 10:00 a.m. to 1:45 p.m.
And the price of admission is completely free for any visitor. So take the opportunity and learn about this great and exciting period of history. And if you want to know a little more about the Archivo General de Indias, come with us to our free tours every morning at 10:00 a.m. in Plaza Nueva.
Visit Seville
Quality Tourism
Sevilla Free Tours
What to do in Seville
File of Indias schedules