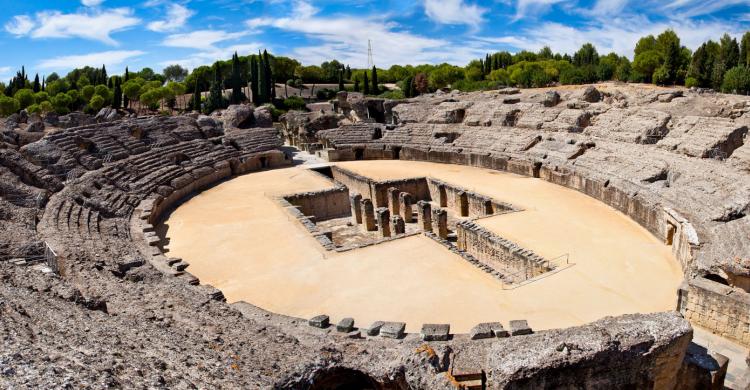 Thanks to Civisur Italica is a candidate to be a World Heritage Site, a category that if we get it would be of great importance to put in value an enclosure that until hosted the filming of the seventh season of Games of Thrones hardly anyone from outside visited. And it is that Italica is much more than what its aspect of abandonment offers us.
Itálica, located between Alcalá del Río (Old Ilipa) and Hispalis Romana, was born in 206 BC, in the context of the Second Punic War as a settlement for Roman soldiers wounded under the command of Publius Cornelius Scipio.
But Italica did not remain as a simple military settlement in indigenous territory, but will give birth to two emperors, namely Trajan and Adriano, a fact that gives us an idea of ​​the importance and splendor that was acquired by this site considered the Roman city oldest founded in Hispania. From the first century it had the status of a municipality and with Adriano himself he got Italica the status of a colony. In addition, we know that since the Augustan era I had permission to mint money.
Although the city is not completely excavated, since the original extension reached 52 hectares, we can see today the ancient Theater, Anfiteatro (Dragon Well in Game of Thrones) and several houses that have survived the pillage and They continue to show us their spectacular mosaics.
However, neglect and oblivion extended their wings over the once imposing Italica, knowing that already in the sixth century the Visigothic Leovigildo had to reinforce the walls that were beginning to fall apart.
In the XIX century Italica was the object of intense plunder, so serious was the damage that the Government decided to take action on the matter and start the first scientific excavations, although the mistake of giving certain freedom to certain experts led to part of what was found in Itálica it would end up in private collections in Seville itself and across the pond to New York. Until the beginning of the 20th century we did not manage to protect the heritage that is here correctly.
Today Itálica is visitable, although it is true that the shooting of Game of Thrones prompted people to visit this emblematic Roman place 20 minutes from Seville, in the municipality of Santiponce, has not the dissemination or preservation it deserves. The city does not have buses that approach us to Itálica as it happens in Córdoba to visit Medina Azahara, but those who wish to approach the city of two emperors have to go on their own either by public transport or in their own vehicle.
Although UNESCO's nomination to the World Heritage Site is now in its second phase, we sincerely hope that it will continue forward so that we can offer a magnanimous vision of what is today the oldest Roman city in Hispania and We thank Civisur for its great initiative that usually make public administrations.
If you want to delight yourself with one of the most important Roman complexes in Spain, here are the schedules:
From September 16 to March 31:
From Tuesday to Saturday from 9 a.m. to 6 p.m.
Sundays and holidays from 9 a.m. to 3 p.m.
Closed Monday
From April 1 to June 15:
From Tuesday to Saturday from 9 a.m. to 8 p.m.
Sundays and holidays from 9 a.m. to 3 p.m.
Closed Monday
From June 16 to September 15:
From Tuesday to Sunday and holidays from 9 a.m. to 3 p.m.
Closed Monday
The price of access to Itálica for the citizens of the European Union is completely free, having a cost of 1.50 € for the rest of visitors.
If you want to discover everything you can see and do in Seville, do not hesitate to join the guided tours of Sevilla Free Tours. You can find all the information of the routes that we offer in https://freetoursevilla.es/tour_sevilla.php Look for the yellow umbrella, the company formed by Sevillian guides Heritage interpreters eager to show you their city.
Visit Seville
Free Tours Sevilla
World Heritage Sevilla
What is Itálica
Times and monuments Seville